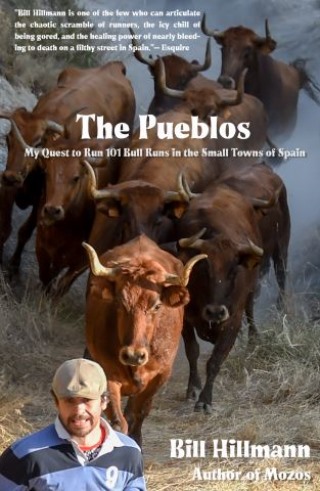 In 2014, author and bullrunning expert Bill Hillmann was gored in the streets of Pamplona by a bull named Brevito who left a baseball-sized wound in his thigh. Two years later he returned to Spain, eager to run with the bulls again.
Bill was on a mission to run a hundred and one bull runs over the course of the summer, putting his marriage and his life on the line in a quest to explore the breadth and depth of the Spanish bullrunning tradition alongside the nation’s top runners, many of whom had become fast friends. It was an exhilarating trip, full of fun and danger in every town—a trip that almost cost him everything. Now he’s chronicled the experience, in a memoir of remarkable power and honesty. It’s a perfect book for an age when everyone, it seems, is looking to leave their boring ordinary life behind and become a viral internet sensation; more importantly, it’s a pure visceral thrill ride, a pulsing rush of blood and adrenalin.
Open this book and you can follow Bill on his remarkable odyssey to the edge of human endurance, and past the limits of sanity. You, too, can hear the thunder of clattering hooves on the pavement behind you, feel the warm wet breath of the beasts on your bare skin, and glance back at the sharp tips of the horns as they thrust towards you. Come along…if you dare.

Bill Hillmann: A longtime Hemingway aficionado, Bill Hillmann grew up in Chicago and has been running with the bulls of Spain for the better part of two decades. He is the author of Mozos and The Old Neighborhood. He divides his time between Chicago, New Orleans, and Pamplona.

"Bill Hillmann is one of the few who can articulate the chaotic scramble of runners, the icy chill of being gored, and the healing power of nearly bleeding to death on a filthy street in Spain." - Esquire