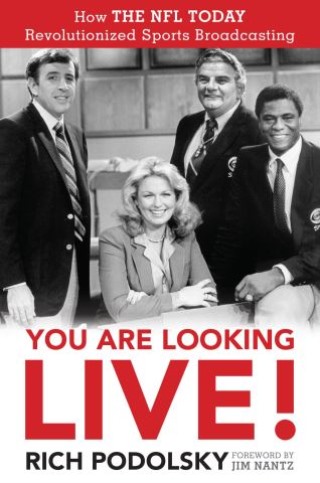 You Are Looking Live!

You Are Looking Live! is about the genesis, success and magic of a live television show that in 1975 captured the excitement of the country, and launched four magnetic personalities to stardom: Brent Musburger, Phyllis George, Irv Cross and Jimmy The Greek Snyder. It was truly a piece of Americana. It was the first NFL studio show to go live and the first to have both a Black and female co-host. Those four personalities battled each other and the competition, and America loved them for it. This is the story of how Brent, Phyllis, Irv and Jimmy got there, their drama and front-page headlines, and what happened to them after the magic ended. Those headlines included Brent and The Greek’s famous fight at Peartrees, Phyllis first marrying the man who produced The Godfather, then dropping him after two months for the next governor of Kentucky, and the shocking firing of Musburger on April Fool’s Day, 1990. America had never seen a show like this before. On the East Coast and the Midwest, people would literally rush home from church to hear what they had to say, and on the West Coast fans loved waking up to it. The NFL Today became so popular that it not only dominated the ratings, but also won its timeslot 18 straight years, from 1975 to 1993, until CBS lost its NFL package to Fox. And today, looking back, these four personalities, like any family, had their own battles, and became even more famous for them.

Rich Podolsky has been an established writer and reporter since the 1970s, covering the Miami Dolphins and writing for The NFL Today. He has been a staff writer for CBS Sports, and has written for The Philadelphia Daily News, The Palm Beach Post, The Wilmington News-Journal, TV Guide and ESPN. He is also the recipient of the prestigious Keystone Press Award for writing excellence from the Pennsylvania Publishers Association. He has written about the business of sports on television many times and is a columnist for David Halberstam’s Sports Broadcast Journal. His passion for music of the ‘60s and ‘70s fueled his desire to write about it. In Don Kirshner: The Man with the Golden Ear (foreword by Tony Orlando), and Neil Sedaka, Rock ‘n’ Roll Survivor (foreword by Elton John), he tells the inside story of their success.