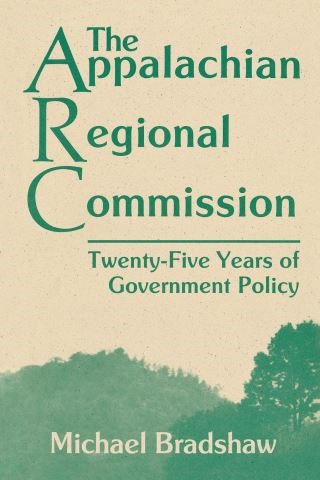 The images of poverty in Appalachia that John F. Kennedy used in his campaign for the presidency in 1960 shocked and disturbed many Americans. Five years later, President Lyndon Johnson and the U.S. Congress demonstrated their commitment to that neglected and exploited region with the creation of the Appalachian Regional Commission. In this insightful book, Michael Bradshaw explores the ARC's unique federal-state partnership and analyses in detail the contributions of the local development districts.

But this work is more than an analysis of a government agency; it is, as Bradshaw notes, "a book about an attempt to change the human geography of a large region of the United States by means of public policy." Bradshaw offers important insights into the ARC's interactions with six administrations throughout its history. The Reagan years were especially challenging: during his eight years in office, Reagan left the ARC out of his budget entirely, but support from the state governors and Congress prevented closing of the Commission and maintained basic funding.

The bottom line for an agency such as the ARC is whether it has made any difference in the lives of the people of Appalachia. Many would say their lives have been affected positively by the government funds that have been poured into the region, but many others continue to question the ways in which the ARC was established and operated. This is a book that should be read by any citizen who is interested in how to make government work effectively at all levels.