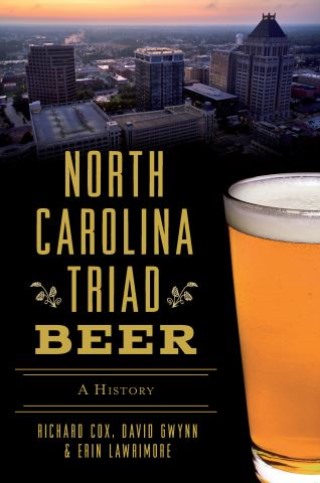 Now centered on Greensboro, Winston-Salem and High Point, the Triad was home to one of North Carolina's earliest brewery operations in the Moravian community of Bethabara. Easy access by rail and then highways attracted national breweries, and starting in the 1960s, the region began producing beer for companies like Miller and Schlitz. The passage of the "Pop the Cap" legislation led to an explosion of craft beer and brewpubs, and in 2019, three of the top five producing craft breweries in North Carolina were anchored in the area. Local beer historians Richard Cox, David Gwynn and Erin Lawrimore narrate the history of the Triad brewing industry, from early Moravian communities to the operators of nineteenth-century saloons and from Big Beer factories to modern craft breweries.

Richard Cox: The authors cofounded Well Crafted NC (www.wellcraftednc.com), a project focused on documenting the history of beer and brewing in North Carolina through historical research, oral history interviews with industry professionals and the collection of records from modern craft breweries. All three work in the UNC-Greensboro University Libraries: Richard Cox as digital technologies consultant, David Gwynn as associate professor and digitization coordinator and Erin Lawrimore as associate professor and university archivist.||||||