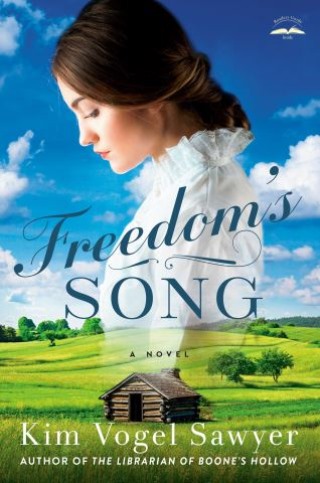 Her voice made her a riverboat’s darling—and its prisoner. Now she’s singing her way to freedom in this powerful novel from the bestselling author of The Librarian of Boone's Hollow.

“[An] enjoyable faith-filled adventure . . . Sawyer’s episodic narrative and rich assortment of characters fighting for freedom provide the story with many twists and unexpected side-plots.”—Publishers Weekly

Indentured servant Fanny Beck has been forced to sing for riverboat passengers since she was a girl. All she wants is to live a quiet, humble life with her family as soon as her seven-year contract is over. So when she discovers that the captain has no intention of releasing her, she seizes a sudden opportunity to escape—an impulse that leads Fanny to a group of enslaved people who are on their own dangerous quest for liberty. . . .

Widower Walter Kuhn is overwhelmed by his responsibilities to his farm and young daughter, and now his mail-order bride hasn’t arrived. Could a beautiful stranger seeking work be the answer to his prayers? . . .

After the star performer of the River Peacock is presumed drowned, Sloan Kirkpatrick, the riverboat’s captain, sets off to find her replacement. However, his journey will bring him face to face with his own past—and a deeper understanding of what it truly means to be free. . . .

Uplifting, inspiring, and grounded in biblical truth, Freedom’s Song is a story for every reader who has longed for physical, emotional, or spiritual delivery.

Kim Vogel Sawyer: Kim Vogel Sawyer is a highly acclaimed, bestselling author with more than 1.5 million books in print in seven different languages. Her titles have earned numerous accolades, including the ACFW Carol Award, the Inspirational Readers Choice Award, and the Gayle Wilson Award of Excellence. Kim and her retired military husband, Don, live in central Kansas, where she continues to write gentle stories of hope. She enjoys spending time with her three daughters and her grandchildren.